As I outlined in my previous post Black Lives Matter, based on data taken directly from the Indiana Department of Education’s website, the IPS district has an overall black enrollment of 50%, a white enrollment of 20%, Hispanic enrollment of 23% (although that is technically not a race, but an ethnicity).

However, certain magnet programs in certain neighborhoods seem to have enrollments of white students that are disproportionate in relation to the numbers above – in particular, the highly popular Center for Inquiry (CFI) magnet programs.

There are currently three CFI schools:

(All data obtained from Indiana Dept. of Ed. Compass website)

Keeping the above demographic information in mind, why is the IPS administration proposing the addition of a fourth CFI school to be located at school 70, currently a performing arts magnet school at 510 E. 46th Street, about a mile away from the CFI school already existing in the Meridian Kessler area?  School 70’s student body is currently comprised of 75% BLACK students.  The entire school/student body of the existing school 70 will be moved to the Key School located at 777 S. White River Pkwy West Dr.  In order to make all of this possible, the students that are attending the Key school currently (69% BLACK) will have to find a new school – because the Key School program, a longstanding (20+ years) program based on Gardner’s theory of multiple intelligences, will be CLOSED.

The most damning part about ALL of this??  The parents at all of the affected schools will not have a chance to discuss until AFTER the board votes.  The parents at each school are not scheduled to be officially informed by the IPS administration until the first week of November.  The vote will be taken on October 29th at the Action Session, 6pm, 120 E. Walnut St. 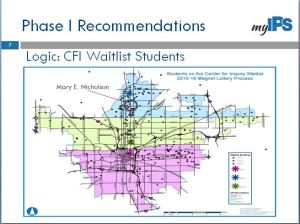 To quote Amos Brown’s assessment of the distribution shown by the map, “Of the students on CFI’s waiting list who live in IPS, but 25% live in the Butler-Tarkington, Meridian/kessler or Broad Ripple neighborhoods. Some 37% live south of 10th and 16th Street. A figure that rises to… 64% when you include students wanting to attend a CFI who live between 38th and 10th and 16th Streets. Just a quarter of the so-called demand for CFI lives in the so called priority northside areas IPS seems to be catering to. In fact looking at the a chart of where School 70 and where CFIs waiting list students live, it make a strong case for putting a fourth CFI school at the Key School location just south of downtown.”  (Excerpt from Amos Brown – 1310 Podcast)

In fact, before Amos aired this particular show, I made that exact same suggestion – why not put the new CFI at the Key School location?  My suggestion was summarily dismissed.

Why does it appear that the black community of Indianapolis is getting the short end of the educational stick…time and time again??  Even though black students comprise 50% (the majority) of the total student body of the IPS district?

About a year ago in 2014, we saw a similar “building grab” when Gambold (the IB High school which these CFI programs feed into) displaced a program and its student body at the prestigious and historical Shortridge High School.  The reason?  The principal stated that he was not getting good parental involvement out on the far west side.  He needed a building that was more “centrally located”.

In my opinion, there appears to be a pattern developing here.  School buildings that are located in middle to upper class (especially north side or gentrifying neighborhoods such as Fall Creek) can be given the boot at any time to make way for a school that serves predominantly white students.

Another significant root to this problem lies in the way that applications for admission to magnet programs are honored.  There is a tiered system of preference in place that dictates how students are placed into the magnet schools they’ve applied for:

As you can see, the siblings of already existing students get first dibs on the available seats.  Second dibs go to those families that live with a mile radius of the school (although there is an argument about whether to draw that circle in even closer to the school).  Proposed for a vote next week is a third tier which would give preference to families who have been on a waiting list for multiple years and never gotten into their school of choice.  The fourth tier of preference refers to the school’s geographic boundaries (different from the smaller proximity circle).  The fifth and final tier of preference goes to children of IPS employees – and in the case of the Butler Lab School and Shortridge High School – preference to children of Butler University employees.  Only after all of these preferences are met will the magnet lottery consider admitting students from the wider, general pool of applications.

After reviewing the current board policy on student assignment to magnet programs, I found an interesting point that needs to be brought to light:

As demonstrated above, the student bodies of CFI are not in proportion with the overall demographics of the district.  This board member wonders the extent to which this policy directive has been carried out, or will be carried out, in order to seek more integration in our magnet programs.  However, it is worth noting that this would only apply prior to the random selection process, which I assume would mean AFTER the application of all of the tiers outlined above.

Would you like to weigh in on this topic at the meeting next week?  The board is scheduled to have a briefing session on Tuesday, October 27th at 6pm, in which discussion will take place on the agenda items.  On Thursday, October 29th at 6pm, the board will vote on (but not really discuss) the agenda items.  The public has the right to sign up to delegate (speak for 3 minutes) on any topic on the agenda, or offer general comments.  Worth noting is the fact that Thursday’s action meeting is televised, but Tuesday’s briefing is not.  You can sign up by filling out the form at this link:

Do you have questions or comments for me directly?  Email me at gayle_cosby@yahoo.com

In an attempt to end on a good note:

In other (national) news, it appears that we will soon be seeing an end to the era of “high-stakes” testing, with Obama’s goal being established that no more than 2% of classroom time be used in taking tests : http://www.usatoday.com/story/news/2015/10/24/obama-schools-test/74536886/

Have you subscribed to my blog yet? You will be notified by email when a new blog comes out. You can do so by clicking the tab in the lower right hand corner of your screen.  Watch for my next blog – it’s gonna be a doozy!!

Atypical politician: unconditional truth teller, seeker and conveyer of wisdom. Tell it like it is, shoot from the hip, can't afford to waste any more time. Let's go. View all posts by gaylecosby