It’s horrendous that we have arrived at a position where public schooling, the education of our citizenry, has become a profitable enterprise for some wealthy elites to increase their personal wealth on the backs of our children.

How hedge funders spurred the pro-charter political network, especially in Indianapolis: with a quote or two from yours truly.

If ALEC has their way with legislators, the Indiana models of ed reform will be replicated in more states across the country – and in new, more shrouded language than ever before!

Since vouchers now have a negative connotation, ALEC will begin calling them the “Great Schools Tax Credit Program” or the “Parental Choice Scholarship Program”.

ALEC was the group responsible for writing and promoting the “Innovation Network Schools” Act (also known commonly as 1321) which was SPECIFIC ONLY TO IPS and signed into Indiana law in March 2014: 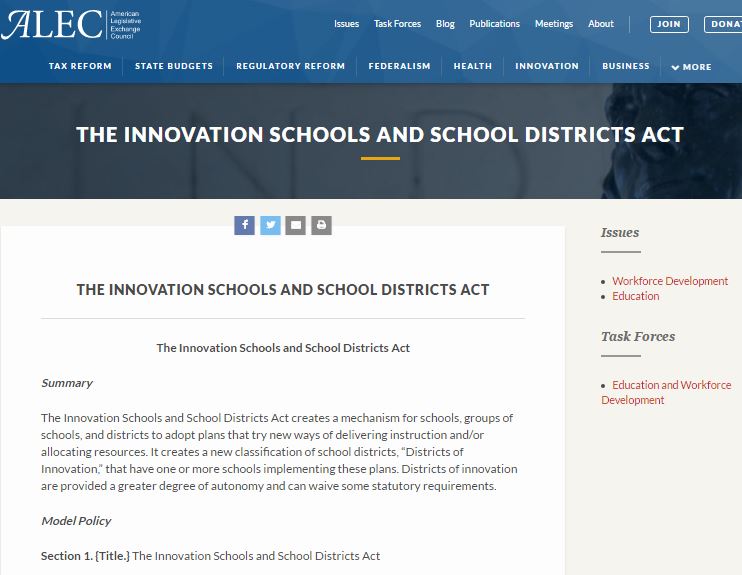 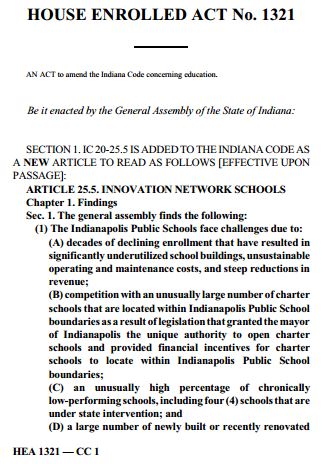 According to a legislative overview by the Mind Trust, the bill was authored by Behning, co-authored by Rep. Huston, and co-sponsored by Senators Miller, Kenley, Kruse, Grooms, Schneider and Taylor.  Of course, I would be remiss if I didn’t mention the fact that ALEC and the legislators also had support from some individuals at IPS.

At least now we know who the true author of this bill was.

A link to all current 2016 ALEC education issues and model policies can be found here.

At the link provided above, there is an explanation of numerous other initiatives that ALEC is pushing in 2016 – including: opposing the Clean Power plan which ensures reduction of carbon pollution; expanding their sponsored “Right to Work” Act in other states (it’s already here in Indiana) which further destroys unions and workers’ rights; and working to ensure that the minimum wage is not set higher by state or local governments through bills like the “Starting (Minimum) Wage Repeal Act,” “Resolution in Opposition to any Increase in the Starting (Minimum) Wage,” and “Resolution Opposing Increases in the Minimum Wage Linked to the CPI.”

All of this information is from the following source:  http://www.prwatch.org/news/2016/05/13099/alec%27s-2016-agenda-snapshot#sthash.bD3aOXW3.dpuf (From the Center for Media and Democracy PR Watch – I highly encourage you to read the full article).

Here’s the best part – ALEC is holding their 43rd Annual Meeting  from July 27-29 right here in Indianapolis!  See the IBJ article and this 2014 Indy Star Letter to the Editor, which calls out several Indiana ALEC members, reportedly including Governor Mike Pence, Chris Atkins, David Frizzell, and the state chairs for ALEC: Senator Jim Buck and Representative David A. Wolkins.

I don’t know about you, but I get absolutely no feelings of “hoosier hospitality” when I think about this group coming to visit.  As far as I’m concerned, their Indiana bills have already done enough damage.

My views expressed here are my own personal views and do not reflect those of any other institution or entity.