Given the recent attention to the topic of racial segregation in Indianapolis Public Schools, I wanted to share my own personal thoughts on the matter.  Again.  I have written a couple of blog posts previously, highlighting the same exact concerns that were put forth by the Indy Star and Chalkbeat in a recent series of articles.

Essentially, the concern is this – why are there pockets of disproportionate white enrollments at certain schools, in certain neighborhoods?  Specifically, why are the CFI schools and other magnets located downtown and along the north side corridor to Meridian Kessler seeing unusually high enrollments of white children, in a district whose overall racial composition is this, according to the Indiana Department of Education: 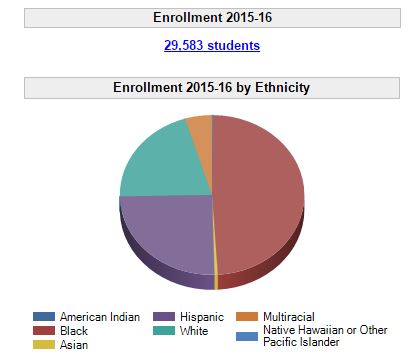 In a perfect world, each of our individual schools would roughly reflect the overall demographics of the district as a whole, as shown above.  That may be far-reaching, but if it did occur, that would be a district without any racial disproportionality in school enrollment.  However, as IndyStar, Chalkbeat, and my previous blogs on the topic have outlined, there are some serious outlier schools where the white student population greatly exceeds the 20.5% district-wide enrollment: 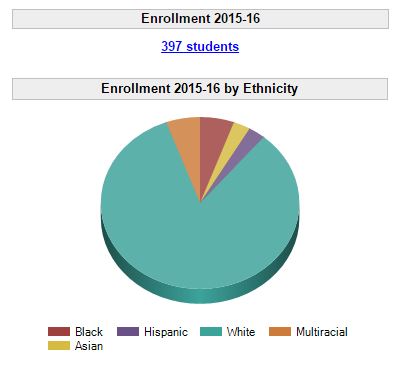 CFI #84 is the most glaringly disproportionate, with percentage of white enrollment approaching 84%.  Note that this school is located in Meridian Kessler.  Looking at the racial composition of the school over time (from the 2006-2007 school year to the present), you can see a clear decline of black students and a steady increase of white students:

School 60 switched from a neighborhood school to a magnet program in the recent past.  You can see the dramatic shift in the racial composition of the school in this chart from the Indiana Department of Education.  In the 2011-2012 school year, school 60 was 82.2% (286 students) black.  In the following school year, the black enrollment at that school dropped to 41.1% (55 students):

Why are we seeing wild shifts in racial composition of these magnet schools?  Are black children that are enrolled in traditional neighborhood schools being pushed out when a school converts to a magnet school?

There are two recent examples of this happening.  Shortridge Magnet High School for Law and Public Policy was dismantled to open the building for relocation of the Gambold International Baccalaureate program.  I’ll predict that a shift in the racial composition of this building will occur and we will see a graph similar to the ones above in the next several years.  Additionally, this year a fourth CFI school will open in the school #70 building at 46th and Central (very close to the other disproportionately white CFI and magnet schools).  The predominantly black student body attending the existing performing arts magnet at the school will be relocated to the near south west side.  I predict that the racial composition of school #70 will change dramatically as the CFI program takes root there.  Amos Brown had plenty to say about this before his passing.  He also dismantled IPS’s claims that they were locating another CFI in the northside Meridian Kessler area due to demand, stating:

“IPS produced PowerPoint slides to buttress its claim that a second CFI is justified being located in Meridian-Kessler. IPS claims most on CFI’s waiting list live in the upper third of IPS’ district geography, north of 38th Street.

But according to IPS documents, that claim is a blatant lie!

Most importantly, what can be done to rectify the situation?  How can we ensure diversity that is proportionally representative of the entire student body of IPS?   It has been well documented that students of all races benefit from exposure to each other in diverse settings.  The third article in the series on desegregation by Chalkbeat offers the Oaks Academy as an example of a school with a diverse student body.  Sure, they are private – but I don’t think that matters here. What matters is the emphasis and intentional action that they put toward ESTABLISHING that diversity.

The bottom line is this – either –

IPS INTENDS TO ACHIEVE DIVERSE SCHOOL SETTINGS OR IT DOES NOT.

IPS Board policy on student assignment adopted in October of 2015 states the following:

c. The Board believes that diverse, integrated, and balanced schools have inherent educational value by bringing together different viewpoints and experiences into the classroom, encouraging racial and cultural understanding, expanding opportunities for marginalized students and families, and preparing all students to be active and informed citizens in a racially and culturally diverse democratic society. d. The Board authorizes the Superintendent to allocate resources towards implementing enrollment and choice practices that reflect the Board’s vision for creating balanced, diverse enrollment at choice schools and programs. District practices may include, but are not limited to, targeted recruitment efforts, community outreach for choice schools and programs, and a lottery process that seeks to create diverse, balanced learning environments that proportionally align with the demographics of the district.

d. The Board authorizes the Superintendent to allocate resources towards implementing enrollment and choice practices that reflect the Board’s vision for creating balanced, diverse enrollment at choice schools and programs. District practices may include, but are not limited to, targeted recruitment efforts, community outreach for choice schools and programs, and a lottery process that seeks to create diverse, balanced learning environments that proportionally align with the demographics of the district.

So, either one of two things has occurred; perhaps there is a desire for this policy to manifest itself, but there has been inaction, or –

this policy is just paying lip service to diversity.  Something the district can point to when it finds itself under scrutiny.

I am having trouble deciding which scenario is the case – but one thing I know for sure.  Gentrification is real.  It’s happening in multiple other large cities, and it’s happening here.  If you need further proof of the role of education in gentrification, look no further than the NEO Plan instituted by the Indianapolis Mayor’s Office of Educational Innovation.  Their NEO Plan is centered around the idea of drawing suburban families back into Center Township in order to increase the tax base.  And they think that creating 30,000 new educational “seats” is the way to do that (not coincidentally, IPS’s entire enrollment hovers around 30,000).

The desegregation of the public educational system was the driving force behind white flight from Indy in the 1960’s – 1970’s.

Will a segregated Indianapolis school system be the key to attracting white families back to Indianapolis?

What role will IPS play in the changing demographics of our city?  Public education is charged with educating all children in an equitable way.  All sides of town deserve a Center for Inquiry school, or equally high performing magnet option.  When neighborhood schools are converted to a magnet or innovation school, there should be careful intention to not dispossess entire communities.  Ultimately, we need to see the action the board policy above directs: “targeted recruitment efforts, community outreach for choice schools and programs, and a lottery process that seeks to create diverse, balanced learning environments that proportionally align with the demographics of the district.”

My thoughts are entirely my own.  I do not represent the Indianapolis Public School board or administration in this commentary, or anywhere on this blog.

Atypical politician: unconditional truth teller, seeker and conveyer of wisdom. Tell it like it is, shoot from the hip, can't afford to waste any more time. Let's go. View all posts by gaylecosby